Having said a thing or two about Steinbeck and Thoreau’s similarities and differences, I want also to simply provide some resources and links that may enhance a reader’s encounter with either or both of these writers.

Part of what drew my mind from Thoreau to Steinbeck was the product of channel surfing. Luck had it that I came across Ken Burns’s new documentary The Dust Bowl. Typical of Burns, The Dust Bowl is a tightly constructed, educational, and entertaining film. If you’re reading Steinbeck, but also if you’re reading Thoreau, the narrative it pulls from facts about the Great Depression, especially those migrant workers derogatorily termed “Okies” (about whose struggle Steinbeck’s The Grapes of Wrath depicts), is enlightening.

The film also features a segment on Woody Guthrie (1912-1967), the iconic American folk musician, whose songs live on as the anthems of Depression-era migrant workers and working-class experiences. It was Guthrie who said, “I ain’t a communist necessarily, but I’ve been in the red all my life,” pointing to the importance of community, especially in times of economic downs (and drown).

In relation, here’s the song “The Ghost Tom Joad,” inspired by the protagonist of The Grapes of Wrath.” It’s written and recorded by an artist for whom Guthrie is a great influence, Bruce Springsteen. In the second clip, the same song is performed by Rage Against the Machine.

It’s also helpful, I find, to be aware of the photography of Dorothea Lange when reading Steinbeck. During the Depression, Lange, a photojournalist, was commissioned by the Farm Security Administration to document the experience of migrant workers from Oklahoma and the surrounding states who flocked to California in search of employment. I expect that, even if you’ve never heard of Lange, you’ll recognize her photographs. 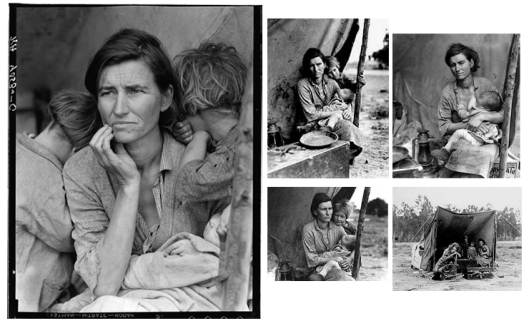 Lange’s work is part of an American tradition of documenting the life of the economically exploited working- and lower-classes. Around the turn of the 20th century, Jacob Riis produced “How the Other Half Lives,” a book of pictures and text about people suffering from extreme poverty in New York. In 1906, Hamilton Holt published a collection of stories about the lives of immigrants titled The Life Stories of Undistinguished Americans as Told by Themselves. In a past post, I mentioned Upton Sinclair’s The Jungle (also 1906), which initiated the formation of what is today the United States Food and Drug Administration.

(I can’t help but to quickly mention that the shanty towns formed by migrant workers during the Depression were referred to as “jungles.” And that, as you know, PT Anderson’s film There Will Be Blood is an adaptation of Upton Sinclair’s novel Oil!. Well, there’s a scene in Anderson’s latest film The Master (a triumph!) that recalls Steinbeck – the protagonist, Freddie Quell is, for a time, living and working on a cabbage farm in the Salinas Valley (Steinbeck!); his homemade hooch mistakenly poisons an elderly worker and Quell is chased from the camp. The frame follows him sprinting across fields of tilled soil. In that moment, we may as well be watching Of Mice and Men.)

Finally, and in relation to my attention to pastoral imagery in my last post, I’m reminded of a recent Italian film depicting the promise of a pastoral life in the United States. Nouvomondo (Emanuele Crielese, dir., 2006; called Golden Door in its English release) stars Charlotte Gainsbourg as a British immigrant to the United States at the turn of the 20th Century. The boat she crosses the Atlantic on is largely populated by Italian immigrants. The film depicts the crossing as well as the treatment of these new Americans when they arrive at Ellis Island. In the beginning of the film, when characters speak of the all that is promised in America, they imagine six-foot tall chickens and vegetables so big they fit one-per wheelbarrow. They find life in the Promised Land to be very different. But the image of rivers running over with milk and honey is ironically rehashed moments before the credits roll, when we witness a growing number of people wading through milk with a creeping sense of bewilderment. Nina Simone’s iconic song “Sinnerman” enhances the eeriness of such a promise. It’s a memorable image:

That’s all for now.

Mere days after beginning, “The Doubloon, a McMaster 2H06 Contest” has been won. The name of the winner is forthcoming, but I will reveal the answer to the contest question.

The song title/six words from Moby-Dick upon which this contest hinged is “Eat Him by His Own Light,” (from Chapter 65, “The Whale as a Dish”) for the 2007 film There Will Be Blood. The film was directed by PT Anderson (Boogie Nights, Magnolia, Punch Drunk Love) and scored by Jonny Greenwood, of the British rock group Radiohead. As it happens, today, November 5th, is Mr. Greenwood’s 40th birthday.

I’ve mentioned There Will Be Blood before. The film stars Daniel Day Lewis as a misanthropic oil tycoon named Daniel Plainview, and if you’ve seen it, or if you should watch it, I’m sure you’d agree his performance (along with his performance in Scorsese’s Gangs of New York) has Captain Ahab written all over it. It’s worth watching for that alone. 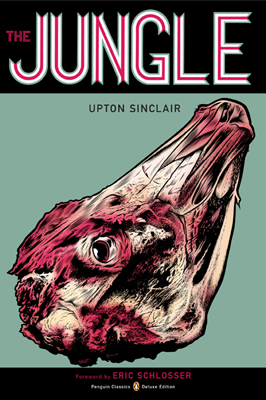 But There Will Be Blood isn’t just tied to great American literature by Greenwood’s brilliant score and the haunting words he lifted from Melville. In fact, There Will Be Blood is a screen adaptation of the American writer Upton Sinclair’s novel Oil! (1927). (Oil? Do we see further parallels with Moby-Dick here? Are they not immediately obvious?) Sinclair gained massive notoriety for his novel The Jungle (1907) which depicted the difficult lives of Chicago stockyard workers while also exposing Americans to the deplorable conditions under which meat was prepared for human consumption. As a result, The Jungle set in motion a series of events and bureaucratic changes that eventually led to the creation of the United States Food and Drug Administration. The things fiction can do! But I digress.

In Moby-Dick, the words “eat him by his own light” come, as I mentioned, from chapter 65, “The Whale as a Dish.” Stubb, having killed a whale, has a whale steak prepared that he may eat as a kind of victory meal, and which he does eat at a table lit by oil from that same whale. It’s a strange idea: that the very thing he slayed now provides Stubb the light to eat it by, as though adding insult to injury. I don’t doubt this was a common practice, and that among certain whalers it may even be a sacred ritual (I’m thinking here of Inuit traditions), but in the case of the Pequod – with it’s perverse mission and sure fate in mind – Stubb’s activity seems to border on hubris, loaded with the promise of doom, inviting revenge.

Here’s Greenwood’s song, “Eat Him by His Own Light”:

Here’s the trailer for There Will Be Blood:

My thanks to all who participated in the contest.